Tomorrow is World Autism Day (April 2nd), and I thought I’d start by saying hi, and talking about some of the things I’ve learned lately.
I didn’t really get to talk about my diagnosis change when I came back, because…I didn’t. So, in 2018 –  as I’ll cover more in C is for CPTSD, E is for not everything is EUPD, and M for Mindfulness – just before Katie-Anne passed away, I was moved to a new team in the next county (in the UK) and the psych that met me basically said ‘let’s look at this from another angle.  It’s all a spectrum, but I think you’re CPTSD rather than EUPD.’.  Turns out that they’re proposing merging the terms that that’s neither here nor there.
Fast forward to my yearly review, and my psych said, after observing some of my tics about language that he finally didn’t think it was a control thing, and that I was mildly autistic.  Soon after, we discovered I could self-soothe (S is for Self-soothe). And, I’ve been involved in the mental health community for a very long time, so I’ve seen a couple of things that I want to touch on.

I don’t think people speak for me

I’ve seen people say ‘this is how autistics/people with autism/those on the spectrum like to be referred to…’.  Can I give you a bit of advice?
Don’t do it.  Just…don’t.  Autism is such a broad thing that one group of people are comfortable with one way to refer to them, another are not. And that’s ok.  I’ve yet to hear anyone in the mental health community refer to ‘normals’ (and I’d whack them upside the metaphorical head), so please, ask how we like to be referred to.  Personally, I like Kai.  And I don’t like it when people assume to speak for me.

I was watching Elementary recently, and I thought Jonny Lee Miller did a great job with Sherlock.  And I thought the portrayal of both Fiona AND Sherlock was very interesting.  There was a lot of giggling on our couch though, when my partner turned to me and said ‘love, you do that…’ and I shrugged.
Autism is generalised specificity in many ways, at least that’s how I feel.  I’m incredibly obsessive about language – I don’t like idiom, I don’t like misuse of language, and honestly, I’m a pedant.  Even my psych said so.  But for me, that’s control.  But not in an overt, power play kind of way. It’s just how I am. I seem to be quite intelligent, based on what I get up to, so it’s not just language…I get obsessive about games, about cleaning, about…stuff.  I have the same problems with understanding the motivations of people as I see in others that are profoundly further along the scale than I’d ever be.  I’ve finally dropped the pretext – I’m completely unsure how to handle people, and I’m finally building boundaries (yep, guess what I’ll be talking about tomorrow).  The thing with Sherlock though was that in Elementary he wasn’t a sociopath – he was autistic.  And I thought that was interesting, because it seems more likely than the way he’s portrayed by other actors (though, don’t get me wrong, I love watching true crime and there was a very long time of ‘faithful only to Sherlock by the BBC’ before my partner had me actually watch Elementary.) I’m noticing mental health is portrayed in more and more ways in the media.  Some good, some could be better. I put Elementary in the ‘good’. 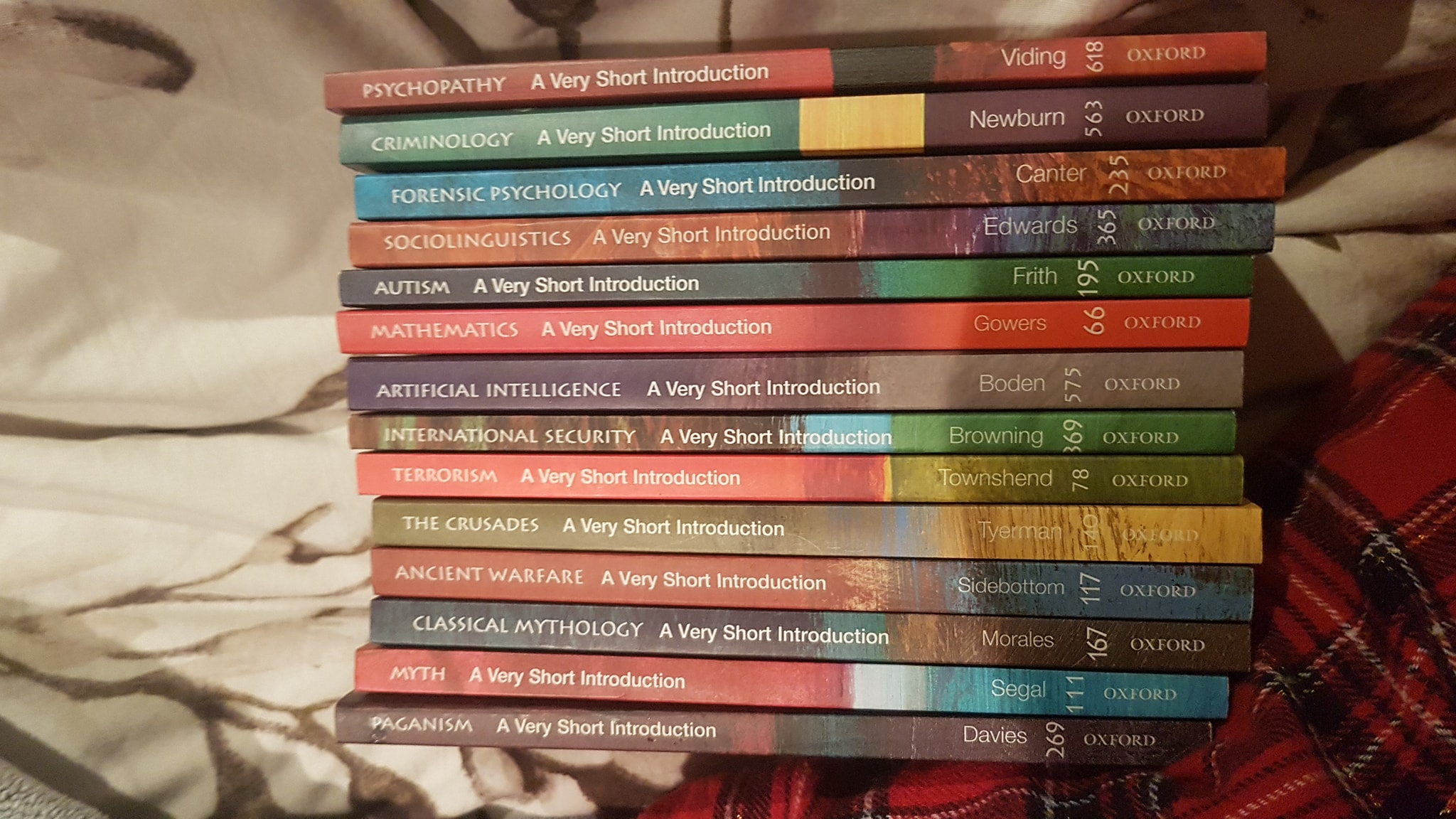 Currently, I’m interested in Maths, AI and microbiology.  I’ve got a pile of 20 books on my bedside table, and yes, that’s sort of the order I can link them up in.  Microbiology and entomology go between sociolinguistcs and forensic psychology, more or less, and I can hop from one to the next and link them all up.  Yes, I have a very non-linear thought pattern.  It’s fabulous (full disclosure, it actually all started with AI, Maths, Criminology and sociolinguistics being for my Combined STEM degree, and the Crusades/mythology etc. was originally for my books, but I kinda managed to link everything up.  So that was fun).
Finally though, like every other mental health diagnosis, you can’t always tell what each of us is walking with. My partner often comments that it’s easy to tell I have very low self-esteem, once you know about my tattoo.  I hate myself, and I have a biohazard tattoo.  But unless you know, it just looks like I have a slightly tribal tattoo on my back. So, don’t judge a book by it’s cover, and please, think about looking into World Autism Day.
What do you think?